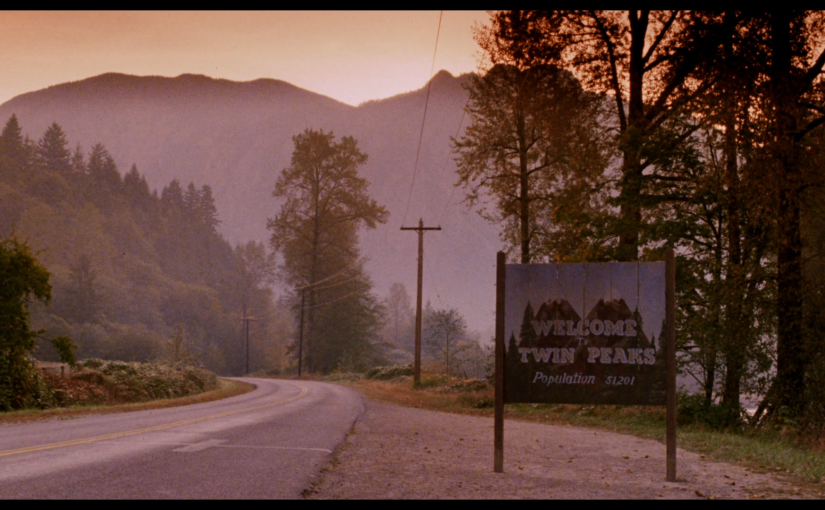 “One of the things that I think is really a signal in David’s work is his ability to get past the narrative convention of storytelling. Very frequently in film and television people will use an emotion not to convey an emotion, but just to convey a plot point or a story point. They’ll say “Oh, there’s grief, we understand that, let’s move on.” What David is really superb at is staying with that emotion and letting it become as real as possible. And many people find that very uncomfortable. That’s why to me, David’s style is actually very very real, and very realistic.”  -Mark Frost, BBC interview, 1990

(note: this essay contains spoilers for the first two seasons of Twin Peaks.)

In the last week, I have watched the entire first two seasons of David Lynch and Mark Frost’s iconic TV show Twin Peaks, as the beginning of a David Lynch marathon. There is, of course, a lot to say about the world of this show, and just as much that feels impossible to say. For me, Twin Peaks has been an experience– not something to analyze or “figure out,” but something to submerge into, swim around in, and emerge an altered being. Mark Frost’s above quote, then, provided an excellent guide for how to talk about the series– what emotions does Lynch evoke during the most powerful episodes? And how does his sense of both the mystical and the excruciating make a show so steeped in myth and esoterica so painfully and powerfully real?

Twin Peaks is inconsistent, but at its most powerful moments it is a plunge into the darkness, an Orphean journey into the underworld of human feeling (figuratively and eventually quite literally). It feels like a confrontation of evil as it swallows up beauty, an attempt to pull some hope out of a gaping void. The nominal destination for the main characters is the discovery of Laura Palmer’s murderer, but the true destination is the root of evil beyond her. There’s a demonic presence possessing people, visitations from giants and strange old men, and a Black Lodge and a White Lodge in the Ghostwood Forest, ancient forces of fear and love casting shadows and light over the nearby town. It feels obscure and mysterious, but it also doesn’t– Lynch creates an atmosphere where everything feels palpable, painful, and real.

David Lynch knows better than anyone else knows how to capture the heady feeling of searching for answers just out of reach in the dark. He taps into my subterranean consciousness, the part of my brain pickled in childhood by the paranoia of fundamentalist Christianity, leaving me once again fascinated by possessions, supernatural manifestations, attempts to “be good” and horrifying abuses shrouded in shadows and denial. The story of Laura Palmer and Maddy Ferguson is a knife in my heart because there are so many Laura Palmers and Maddy Fergusons, abused terribly and silenced by those close to them. I have almost certainly known someone like Laura Palmer, without knowing her at all. I grew up in small Pacific Northwest towns, and tight-knit communities riddled with unseen dysfunctions. In these communities, silence really can be deadly, for the soul if not for the body, and it really does feel like pain, fear, and evil are cosmic forces, with explanations just out of reach in the forest somewhere.

Dale Cooper goes looking for explanations. He dives into the darkness, searching for answers. When he eventually finds a path to the Black Lodge, he plunges in to save someone he loves, someone whose safety he fears for. Inside the Black Lodge, in the very end of the show, fear dismantles him. He’s been strong in the face of darkness for the whole story, but here his fears are laid bare. He’s confronted by shadow versions of Maddy and Laura, the victims he couldn’t save. It’s Maddy who throws him off guard–she is, of course, the victim he really failed to save when warned “it is happening again”–but Laura screams in his face, intensely and repeatedly, embodying the pain he’s been contending with all along. Evil is easy for Dale Cooper to confront, but pain and fear expose his weaknesses. When the woman he loves finally appears, all he can call to mind are his regrets, his failures, his fears. The show ends with evil taking over, with Dale Cooper smashing his head into a mirror and cackling demonically.

Dale Cooper, for most of Twin Peaks, is an aspirational figure. He’s honest about his demons, he accepts others with an open heart (he’s a trans ally!), his enthusiasm and ingenuity wins the day. It’s extremely devastating and disturbing to see him overtaken by the same evil presence that consumed Leland Palmer, the same monstrosity responsible for the evils Cooper was so adept at fighting back against. Dale Cooper is, for most of the story, a figure of love, but in the last act, love gives in to fear. Cooper’s fears feel familiar; I’m trying my best to not let this scare me. The assertion of the show is, seemingly, that we are all capable of darkness, and the world can break down anyone. The best we can do is be strong, and hope it doesn’t cost us too much.

Luckily, there is more Twin Peaks to come. There’s a movie about Laura Palmer, a passion play I’m both eager and frightened to witness. Even as a mostly-unseen presence in these 30 episodes, I’ve felt a deep well of feeling for her, so spending time with her directly, and engaging with the horrors in her life more directly, is bound to be an intense experience. Then there’s The Return, the 18-episode David Lynch-directed 25 Years Later continuation. I hope this isn’t the end of hope for Dale Cooper, and I’m glad to spend more time cathartically exploring the dark woods around Twin Peaks, Washington. Answers are elusive but unnecessary– time spent with Lynch is time spent communing with the darkness and light around us, and the darkness and light present in my own soul. The questions are the most important thing.